The Discovery of Artemisinin and Advances in Related Research (cnki.com.cn): 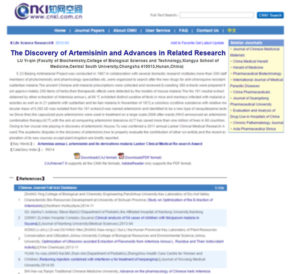 „Beijing Antimalarial Project was conducted in 1967. In collaboration with several domestic research institutes, more than 200 staff members of phytochemistry and pharmcology specialities etc., were organized to search after the new drugs for antichloroquine resistant subtertian malaria. The ancient Chinese antimalarial prescriptions were collected and reviewed. Exceeding 380 extracts were prepared from approximately 200 items of herbs, their therapeutic effects were detected by the models of mouse malaria. The No. 191 neutral extract obtained by ether extraction of Artemisia annua L. at 60 exhibited distinct curative  effects in mice and monkeys infected with malarial parasites as well as in 21 patients with subtertian and tertian malaria. In November of 1972, a colorless crystlline substance with relative molecular mass of 0.282 kD was isolated from No.191 extract, it was named artemisinin and identified to be a new type of sesquiterpene lactone. Since then, the capsulized pure artemisinins were used in treatment on a large scale. 2006 afterwards, WHO announced an artemisinin combination therapy (ACT), with the aim at conquering artemisinin tolerance. ACT has saved more than one million of lives in 80 countries. Owing to her crucial role playing in discovery of artemisinin, Youyou Tu was conferred a 2011 annual Lasker Clinical Medical Research Award. The academic disputes in the discovery of artemisinin, how to properly evaluate the contribution of other scientists, and the recent exploration of its new sources except plant kingdom are briefly reported.“

The discovery of artemisinin and Nobel Prize in Physiology or Medicine (ncbi.nlm.nih.gov) :

„The 2015 Nobel Prize in Physiology or Medicine was awarded to Professor Youyou Tu for her key contributions to the discovery of artemisinin. Artemisinin has saved millions of lives and represents one of the significant contributions of China to global health. Many scientists were involved in the previously unknown 523 Project, and the Nobel Prize given to a single person has not been without controversy. Here we summarized some key events in the 523 Project and present our views on the Award to help the public better understand the rationale of the Nobel committee’s decision, the significance of the discovery, and current issues related to artimisinin in treating malaria.“